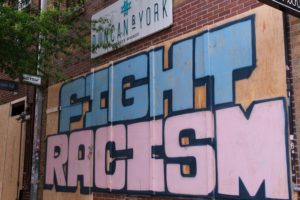 Dozens of Asheville Grown member businesses have signed on to this letter in support of the right to protest and denouncing the brutality and violence from the APD. If you have a downtown business and would like to add your name, please contact Jenna Yarosh Wilson from Patton Avenue Pet Co.

We are small business owners, and active members of the Asheville community. We have businesses in Downtown Asheville. And we stand with the protestors.

Our businesses are in a vulnerable position after COVID, we’d finally opened back up and were trying to get back on our feet when these protests began. And we still stand with the protestors.

Several of our storefronts were vandalized, with the potential for more damage in the days to come. We’ve boarded up our windows and are already seeing a decline in business coming to our Downtown locations. And yet, we still stand with the protestors.

For too long, money and property have been more important to this country than Black Lives, and it’s well past time for that to change. While we are opposed to the senseless destruction of private property, particularly that belonging to small businesses, this cannot be used to justify the brutality and violence we are seeing from the Asheville Police Department towards protestors, the vast majority of whom are peaceful. When the choices are made to destroy water and medical supplies, to indiscriminately shoot protestors with rubber bullets and tear gas, to set curfews to allow for mass arrests- do not use our businesses as an excuse.

The right to protest the ongoing murder of black people by the police is a constitutional one. It is a right that we, and most of the fellow local business owners we know, believe strongly in. So strongly that we would rather lose money than see protestors’ voices silenced and bodies wounded.

What we want is for the Asheville Police Department to attempt deescalating measures with the crowd before using violence. Even better- we’d like for the police to take part in the protest instead of standing against it. We understand the challenges of policing during these extraordinary times, but to use the very tactics that are being protested against our citizens is counterproductive to the end goal of progress and change.

We want to see a better city in the future- one that benefits ALL people and not just those with white skin or privileged backgrounds. And it needs to start now, with the deescalation of the APD’s protest response and policy changes that ensure equity for all Asheville and Buncombe County residents.